We have visions. The destination of Queensland’s far north region evokes imagery of sprawling, evergreen rainforests and a stretch of tropical shores.

Which is precisely what you’ll encounter; the Daintree Rainforest and Great Barrier Reef are the only two world heritage icons found side by side. Yet there is a vital key to the Daintree’s existence, one that should be thought of as a third icon in our environmental pride; the Southern Cassowary.

Standing as a 2m masterpiece of evolution, this striking bird plays an imperative role in the health of our rainforests. Such is its importance, the Queensland Government, along with local councils, businesses, and preservation giants have banded together to sponsor the World Cassowary Day festival. Family orientated and in the spirit of conservation, we can all help ensure the cassowary’s longevity by celebrating near and far.

Elusive as this bird may be, the Southern Cassowary is unforgettable upon a rare sighting; especially if you’ve never seen one before. Thought of as a living dinosaur, the species towering height and striking colour produce a breathtaking vision. They stand anywhere from 1.5 to 2 metres tall with glossy ebony feathers. Just as remarkable is the bird’s featherless blue-purple neck and red wattles, along with one other outstanding feature…

Culturally significant as it is environmentally on World Cassowary Day, this esteemed bird, according to indigenous legend, was once laughed at by his fellow forest creatures for being unable to fly. Embarrassed, he fled from the waterhole where they all lived with such speed, he ran straight into a stone that lodged in his head. This created his casque; a large helmet structure on top of the cassowary’s head. And like its mythology, nobody knows why the casque exists; some say it’s a vibrational antenna to pick up on other cassowaries in the area, others say it’s a show of strength.

On World Cassowary Day, you’ll find indigenous performances and presentations in support of a creature legendarily thought of as the ‘Fearless Leader of the Forest’.

Aside from a miraculous show of beauty, the Southern Cassowary’s personal role in rainforest preservation is key to our region’s survival. In fact, the cassowary is known as a ‘Keystone Species’. Found ranging from the Paluma National Park to Cape York, and throughout the Daintree Rainforest, our Southern Cassowary ensures the thriving of forest diversity by eating and distributing the seeds of over 70 plant species. All of which cannot be distributed on their own, or by any other wildlife. The Southern Cassowary alone literally fulfils a role that legions of animals together accomplish everywhere else. You may well ask why this role is so vital? Not only is the Daintree our most significant record of every evolving stage of plant life in history, but in years to come, further studies into the famed rainforest may unlock cures for many of our medical mysteries. Without the cassowary, not only would our treasured rainforests diminish, but our chance of future knowledge too.

This equally fun and essential day was first established in 2014 by conservationist, Paul Webster, blossoming over the years into a mammoth event. A free festival, World Cassowary Day takes place in Fogarty Park, Cairns, on Sunday, September 24th and this year’s 2017 celebration is shaping up to boast its greatest global recognition yet, with everything from indigenous displays, live music, fascinating presentations, and over 50 participating stalls. Food-vans will be providing delicious treats, or bring your own picnic! Kids will adore the face-painting, treasure hunt, and crazy critter flash-mob dance. You may even want to dress up as your favourite rainforest creature for the chance to win a prize.

Embracing the spirit of conservation, this family orientated festival both educates and celebrates the effort of protecting cassowaries and their rainforest home.

After each party, we’re always left with lingering and cherished memories – which a few passionate organisations are relying on. The protection of cassowaries and their environment is an ongoing and dedicated effort to Rainforest Reserves Australia, and the Cassowary Keystone Conservation, who strive each and every day. Rainforest Rescue are likewise devoted ambassadors who tackle preservation of the Southern Cassowary and its habitat from the ground up – literally. Committed to rescuing vulnerable rainforests, the non-profit organisation buy up land, with a visionary ethos of planting, restoring and maintaining rainforests forever. Thus, again ensuring further programs to protect our rare biodiversity, along with its flora and fauna. 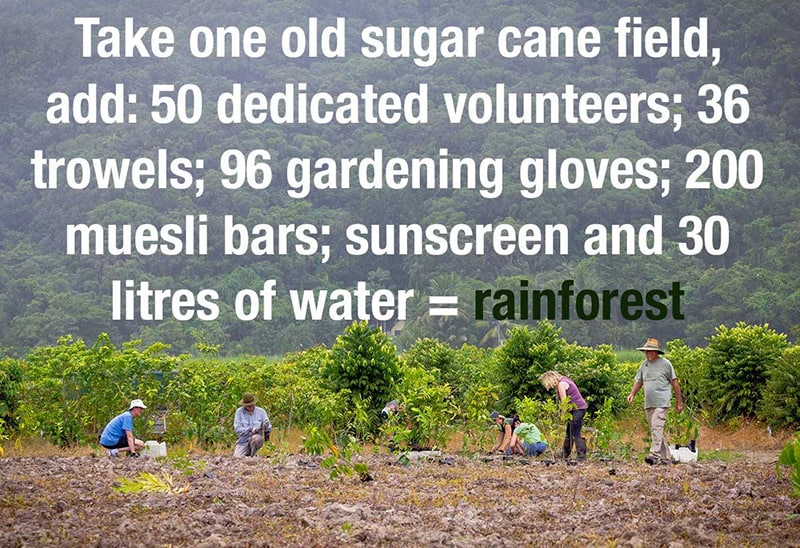 You can also be a vital ambassador of the Wet tropics by contributing in these many ways:

Together, it’s our celebrated responsibility to conserve and protect. After all, when it comes to the topic of our rainforests and cassowaries – ignore it, and it will go away.

The Diversity of the Mossman River

Visiting the Mossman River with Back Country Bliss Adventures? Take a moment to learn about our...
Read More

6 Must Do Cairns Rainforest Experiences

If you're visiting Cairns there is no surprise that the Daintree Rainforest and Cairns Rainforest...
Read More

Ready for your first time snorkelling? Let us introduce you to River Drift Snorkelling. If you’re...
Read More

How to do the Daintree with Kids – Family Friendly Daintree Ideas

Whether you're visiting Cairns and Port Douglas in the school holidays or just looking to escape...
Read More

Looking for kid friendly ideas in Cairns and Port Douglas? Whether you're visiting Cairns in the...
Read More

Looking for the perfect Daintree Rainforest itinerary? We have you sorted. Starting and ending in...
Read More

How to Experience the Spectacular Daintree Rainforest

Heard of the world heritage listed Daintree Rainforest? If you are visiting Cairns and Port...
Read More

10 Incredible Things to do Near Port Douglas

Paradise for Parents! 10 Affordable Activities for Kids In Port Douglas

The seaside town of Port Douglas has a reputation for luxury. Yet locals know that within the Wet...
Read More